Various site specific projects made for The Incident, in the city of Fribourg, Switzerland as part of the Belluard- Bollwerk International festival.

Water Vortex
The water projects consisted of installation and performance work made in response to the water courses and medieval fountains of the city. All the projects were based on site specific research and the anomalous properties of water. The themes were inspired by the scientific work on vortex currents in water carried out by the engineer Viktor Schauberger 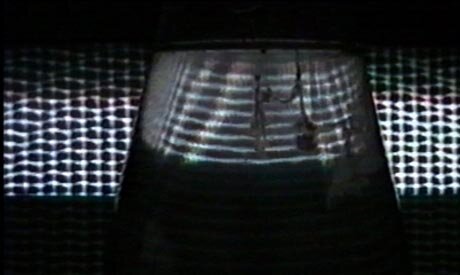 Installation detail showing collected water sample and light reflections
Everything emerged from the water. Water therefore is the raw material of every culture and the basis of every bodily and spiritual development 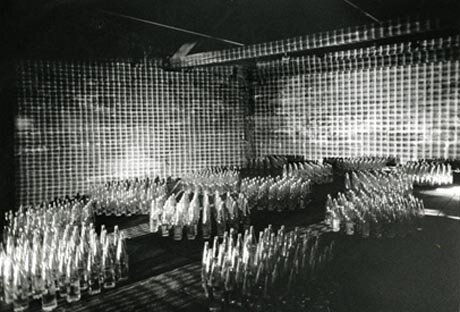 Jacques Vallee
speaking at the Incident

Visible and invisible water courses in Fribourg
The projects engaged with research into the possible electromagnetic, molecular memory of water as proposed in a hypothesis by the bio-molecular chemist Jacques Beneveniste. Beneveniste carried out experiments akin to homeopathic methods to suggest that water had a recordable molecular memory. My interest was to extend these biomolecular methods and metaphors into artworks. The basis of this work was to re-imagine Fribourg as a fluid databank using the analogy of the telephone system and linking mind, body, earth.

Water Consciousness Databank
Installation work was presented in the upper gallery of the Bollwerk fortress. This consisted of a dual screen video projection and sound, a floor installation of several hundred bottles of water, a small diorama and graphic artworks. The installation represented a vast fluidic data bank using water samples from Fribourg. The installation was conceived as a metaphorical computer in the form of hundreds of glass bottles filled with water, placed into patterns. A projected video image composed by mathematical algorithm generated a moving image of a wave train ripple of water played a pattern of light across the glass. The simple wire frame image refracted through water and filled the darkened space with ambient patterns and waves of light. These kinetic currents were reinforced by recordings of heart beat, rushing water and white noise. 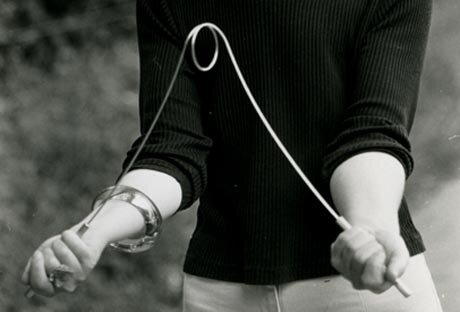 Remote Viewing of Water Vortex Energy Map
Remote viewing and the mapping of the invisible through dowsing. In map dowsing for water the dowser can use a series of passes over the map to plot and locate underground springs and streams. The project employed the skills of a remote viewer and water diviner, Elisabeth Sulivan from Wales to create maps of unseen forces and water course energy systems in the city of Fribourg and to develop a physical map. I collected water samples from the fountains and the Sarine River. This water was analyzed in various ways. Elisabeth Sulivan, a member of the British Dowsing Association agreed to work with me to divine the routes and quality of underground springs and water systems in Fribourg using maps. She did this remotely from Benton Castle, her home in Wales. After several months a map arrived of the spiraling energy lines of water which were drawn and superimposed over the city plan. I took this unique map to Fribourg and recorded the re-reading and testing of the marked spiralling lines by two local water diviners using different techniques. 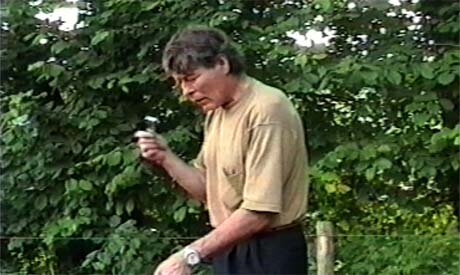 Water Divining Workshop
The map provided the basis of a public workshop on the theme of intuitive modelling. With the help of the Belluard Festival organisers I set up a small workshop with local people and a well known local dowser taught them how to dowse. Dowsing has been used as a means of divination and for seeking out the invisible and unknown for many thousands of years. It is based on the analysis of intuitive knowledge. By the use of a pendulum one learns to take note of certain reflex. There is an established relationship between the location of churches and underground water. In the general index of Jung’s collective works there are many symbolic meanings attached to water. With the mythological, astrological and psychological aspects of water a link is made between living water, redemption and the wholeness which is the aim of all psychological work. Jung established the existence of the collective unconscious which he described as the vast ocean in which we find the archetypes. The built-in shapes and patterns which come to life when a conscious experience lends them power. 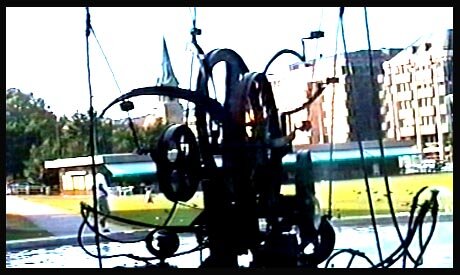 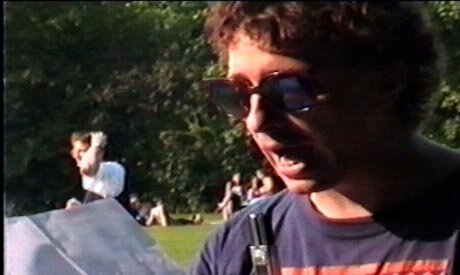 The Tinguley Fountain Recordings
People from Fribourg were invited to write anonymous poems in dedication to the Sarine river and figurative, allegorical fountains. These dedications written in German, French and English were chanted aloud by Jeremy Narby as part of a public performance to the noise of the crazy Tinguley fountain (Tinguley was born in Fribourg) a portable radio on the wall of the fountain was also playing white noise that sounded like water. The poems were repeatably read in several languages into a portable tape recorder against the crazy rhythms of the spluttering fountain. The multi- recorded tape was then played back loudly as a public sound performance.


At the Belluard, Rogers created an installation in a gloomy corner loft high inside the fortress. On the creaky wooden floor of the loft stand elaborate patterns of glass bottles each filled with water. Candles flicker on the bottle glass, making the water shine and sparkle. Video monitors around the edges of the room reflect the scene and put it into fluid motion. The theme of Roger's The Memory of Water is the elemental energy pattern inherent in water. The power of the water element that usually goes unnoticed now hovers ghost like through the room. The phenomena can be literally true yet keeps its essential mystery.

Kathleen Roger's The Memory of Water fuses thick darkness with an array of light patterns - computerised and elemental - to coax the viewer into peripheral vision. She also uses sound patterns to gradually widen the edges of experience. The end effect on the viewer resembles James Turrell's luminosity. Both affect the feeling of the space/time dimension. Peripheral awareness renders the present spacious and non-temporal. Relaxing into our physical centre and letting attention sink into the gut, the eyes soften and the attention spreads throughout the entire field of view. The awareness lives in open space as opposed to the brain's linear time sequence. A wide-angle view slows down the frantic race of the logical chains of thought. We find ourselves visited by those cosmologically primal elements in which we live: water and light. They manifest themselves under artfully prepared conditions.

Virtual design stands at the crossroads of interactivity. Two models of world-building beckon: the tunnel and the spiral. The tunnel sucks us further into technology. The tunnel molds human perception to push forward, to ignore peripheral awareness, to fixate. The spiral, on the contrary, rotates us in virtual worlds that return us to ourselves, that deepen the wide-angle awareness of ourselves as primary bodies. The tunnel teaches us to maintain first-person perspective while the spiral attunes us to others from whom we learn about ourselves. The tunnel feeds us more information. The spiral aspires to wisdom.

The Incident, Symposium, Fribourg, Switzerland as part of the Belluard- Bollwerk International festival.

The Incident
For several years I worked alongside curator Rob la Frenais contributing to both the intellectual and artistic concept of the Incident in Switzerland and London. The Incident exhibition and symposia themes were concerned with art, technology and phenomena. In Fribourg, the event was composed of exhibitions by major visual artists, performances by theatre companies and music groups and a two week series of talks and debates and a three day symposium of art and phenomena. The conference was addressed by figures such as Jacques Vallee, the noted astronomer and computer scientist, James Turrell, the visual artist, HR Giger, the film designer, Kristine Stiles, the art historian, Terence McKenna and Jeremy Narby. Artists included; Linda Montano, Ulrike Rosenbach.