A series of Interactive VR works for use with headset and data glove and the multi screen installation, The Still Room, were shown at The State of the Image as part of Eldorado and the cultural capital of Europe, Koninklijk Palais, Antwerp, Belgium.

Video stills from Sleepless Dreaming in the Cybernetic Cabinet

The Electronic Void
Sleepless Dreaming composed of computer model houses and interiors that a participant could navigate through to experience the gravitational paradox and the heart of VR . In this work a participant was in effect in two spaces simultaneously. In the real world of the gallery, and moving along a recurrent corridor of rooms navigating through doorways, along walls and into a void.

Haunted House
A participant was represented by an avatar in the form of basic three dimensional cursor and navigated using a data glove and hand gestures. The interior spaces were rendered with images of early spirit photography collections. The reading of the infinite space suggested by VR and these reversioned images provided a nostalgic vision of the technological VR apparatus.

Marionettes
Spirit photographs date back to the very beginning of photographic history and continue to be an important part of spiritualist practise. Ghostly images resembling dead family members appearing alongside a sitter became known as extras and the photographers claimed to be psychics.In a VR space, the marionettes we encounter might be automatic projections from our own consciousness, or they might have their centers elsewhere. They might be the dead dreaming of the dead or the dead dreaming of the living. 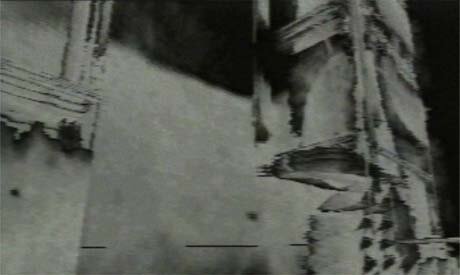 Video still from Sleepless Dreaming in the Cybernetic Cabinet

Parapsychology
The multi-sensory model of VR at the time suggested an infinite number of possibilites for transducing the senses and body. The project research led to a participation in laboratory experiments within the Department of Parapsychology at Edinburgh University where I explored anomalous phenomena associated with ESP. This research was acheived within an electronically controlled telepathy experiment with the late Koestler Professor Robert Morris under the direction of parapsychology researcher, Kathy Dalton who was exploring out-of-body experiences, dissociation, absorption, and alterations of consciousness with a creative population in the Ganzfeld . The perceptual psychology department, were using immersive VR in experimental work. The themes of intuitive modelling and ESP are developed in later projects.

The State of the Image, Antwerp, as part of the cultural capital of Europe
Eldorado, Koninklijk Paleis, Antwerp, Belgium.

Seduced and Abandoned in the Virtual World, The Body as Metaphor, Institute of Contemporary Art, London. Video distribution by ICA publications.

Searchable tags for this entry:  none