Video and sound installation commissioned by the Millais Gallery, Southampton for Ingenious Transformations.

Venom Compound
Video work exploring the relationship between humans and snakes in the context of venom extraction and the DNA of anti-venom compounds. 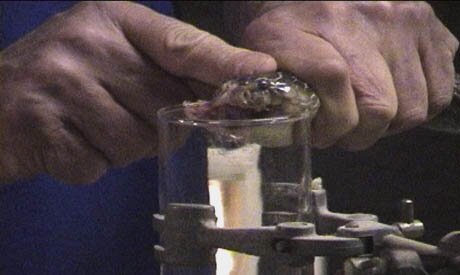 Cobra Venom
This installation presents a dramatic film of the late Jack Corney, an extraordinary world snake expert and owner of Sandown Zoo, a World Health Centre for Venom Collection on the Isle of Wight. The film follows his skill and actions in extracting venom from a deadly Cobra. Jack Corney worked closely with David Theakston, of the Liverpool School of Tropical Medicine, to supply venom to the World Health Organisation for the production of anti-venom. As a result of his close encounters with some of the world's most dangerous snakes, Corney ended up in intensive care on three occasions. Once, after being bitten by a rattlesnake, he was pronounced clinically dead - at the time he had an "out-of-body experience", and reported being fully aware of the doctors' attempts to revive him.

Shamanism
The video works on a psychological and mythic level to convey an intimate shamanic understanding and intuitive handling of the snake on a biological and biomolecular level. During the close process of filming the Cobra escapes, creating a dangerous situation. Since filming it was discovered that over time he had become immune to the powerful neurotoxins in Cobra venom.