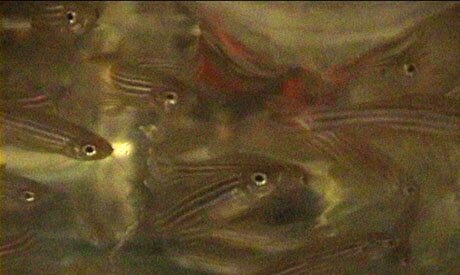 The Perishable Soft Image
Genes that control other genes have nucleotide seqeunces that are conserved accross the whole animal kingdom. Repeated functions, organizers and zones are transplanted into developing embryonic fish to effect a developmental cascade. The result is mutant individuals in which one body part is replaced by another.

The more biologists learn about genes, the less sure they seem to become of what a gene really is. Knowledge about the structure and function of the gene abounds, but also, the gene has become curiously intangible.

Relating the gene as a molecular biological unit to the gene as Mendelian factor produces internal inconsistencies; but genes have been deeply illusive entities even with the traditional Mendelian framework.

Peter Beurton, Raphael Falk, Hans-Jorg-Rheinberger
The Concept of the Gene in Development and Evolution

Time
Insights into biological phenomena made by molecular geneticists show biological changes in the structure of DNA over time and detail what happens to a molecular structure and gene expression in the period of one mitosis to the next. Chromosomes condense during mitosis and through the motion of intermingling and disentanglement become separate entities. There is a time based "betwixt and between" state in this biochemical condensation that remains unfathomable. In molecular genetics hybrid forms of "betwixt and between" are collected and stored. Potential states of being that are neither fully alive, biologically dead nor naturally self-regulating can be sustained experimentally is a state of permanent existence. Molecular geneticists working on the extreme limits of gene regulation and expression in gene therapy and retro viral research constantly evolve and apply models of this "betwixt and between" state. The chirality, handedness and silencing of genes and proteins can be reworked and re-mapped and provide science with an emergent and phenomenological model of life that correspondingly provides the subtle interactions, cell dynamics and vectors of death.

Signal Cascade
In genomic research the epigenetic vectors of death can be reworked to provide images and physical models of cell migration and differentiation. My artistic research is to understand what science knows about genetic transcription and to address what can be registered as occurring during the morphogenesis of a living organism. When biophysicists predict and provide a three dimensional structure of a protein molecule they also generate more extravagant visual complexity in the living cell. A pool of cells under a light microscope, seen as a swarming colony, has infinite dimensionality and scale. Ancestral affinities are fluidic. The appearance of spontaneous correlative phenomena at the level of RNA are visualised using different conceptual and optical tools and techniques.